FOR IMMEDIATE RELEASE
Contact: Esosa Osai
313.673.5443
victorosai@yahoo.com
A DIFFERENT TYPE OF PROTEST IS HAPPENING IN DETROIT
Three Generations are Gathering to Fight for a Spiritual Change

Young people and families are gathering on Mother’s Day weekend for a protest that is different from most. “The PROTEST” is a release concert for a book entitled Killing Idols for REVIVAL. It’s happening on Saturday, May 11, 2013, at the Russell Industrial Center Auditorium on 1600 Clay Street, off of the I-75 Freeway, just North of I-94.
Justin Rizzo, a worship leader from the International House of Prayer in Kansas City, MO, is scheduled to lead worship and prayer. The Spoken Life Project, a spoken Word ministry from Chicago, IL, is also scheduled to speak. Jay Brian, and JWil Music, formerly of Jay & Jay SOUL, will also be rapping and speaking at The PROTEST, in their first Detroit performance as individual solo artists.
“We’ve talked to all of the artists, and even though they are from different areas of the MidWest, we’ve noticed that they are going in the same direction towards holiness, creativity, and fruitfulness in the Kingdom of God,” says Esosa Osai, Author of Killing Idols for REVIVAL.
Killing Idols for REVIVAL is a book that uncovers the hidden plots against the Church through dreams, interpretations, scriptures, and testimony.
Friendship Productions is lifestyle ministry. For more information, check http://www.fpdj.com
### 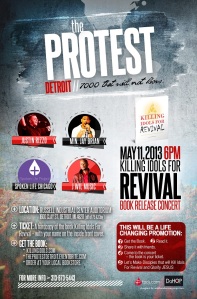